PubMed contains millions of publications that co-mention terms that describe drugs with other biomedical terms such as genes or diseases. DrugShot is a web-based server application that enables users to enter any biomedical search term into a simple input form to receive ranked lists of drugs and small molecules based on their relevance to the search term. To produce ranked lists of drugs, DrugShot cross-references returned PubMed IDs with DrugRIF or AutoRIF, curated resources of drug-PMID associations, to produce an associated compound list where each compound is ranked according to total co-mentions with the search term from shared PubMed IDs. Additionally, lists of compounds predicted to be associated with the search terms are generated based on co-occurrence in the literature and signature similarity from L1000 drug-induced gene expression profiles. Through its search functionality and abstraction of drug lists from different sources, DrugShot can facilitate hypothesis generation by suggesting small molecule sets related to any biomedical term of interest.


AutoRIF
AutoRIF contains associations between small molecules and publications. AutoRIF is automatically generated, and it currently contains 7,992,745 associations. We constructed AutoRIF by querying the NCBI E-utilities API with drug names (each matched with a MeSH identifier) and collected the PMIDs for each query.

DrugRIF
DrugRIF is an alternative file that contains associations between small molecules and publications. DrugRIF is automatically generated, and it currently contains 1,996,791 associations. We constructed DrugRIF by querying PubMed with InChIKeys (each with an associated small molecule name) and collected the PMIDs for each query.

The query box of DrugShot contains two free text input fields where users can enter multiple search terms in combination. The top field is for terms that will be converted to associations with drugs. The bottom free text input field is for terms that the user wishes to exclude from the search. For example, the figure above describes how to conduct a search if we want to identify drugs that are most relevant to the search term “liver fibrosis” but not "cancer".

The input field labeled "Top Associated Drugs to Make Predictions" sets the number of top drugs from the query to use for generating the predicted lists. This value can be changed later after the query completes.

The query time varies from instantly returned results to about 30 seconds. The time for the query to complete is mostly dependent on the number of associated publications found for the search terms. A very general search term such as "cancer" or “diabetes” will result in a longer wait time than a more specific search term such as "hair loss". Below the free text input fields, several sample queries are provided. Clicking on these terms triggers a query. 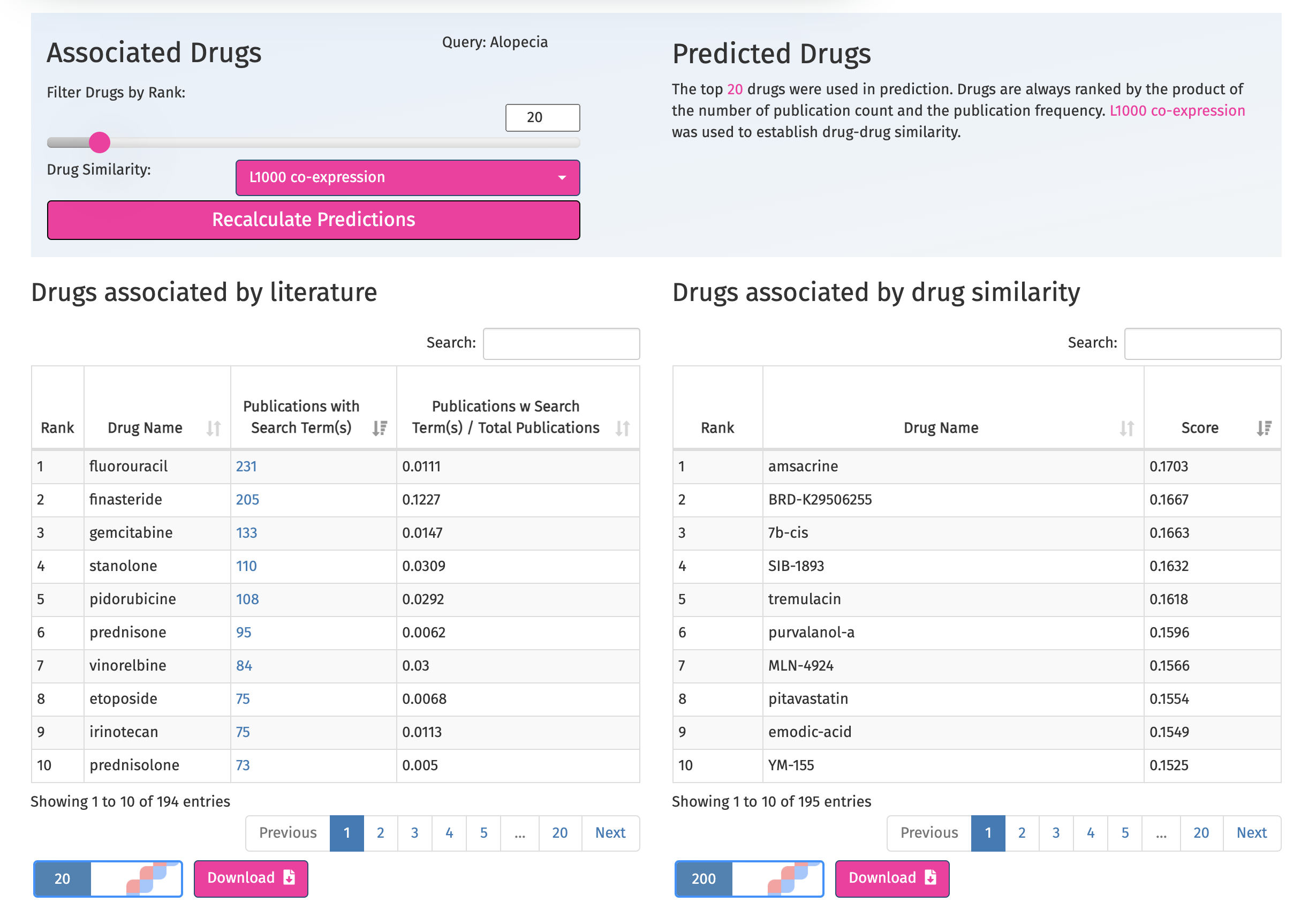 Associated Drug Table
The associated drug table contains the same information that is displayed in the scatter plot. The table will appear once the query results are returned. The number of drugs returned by the query can vary, depending on how many drugs are associated with the search terms. The slider above the table enables users to set the threshold for how many drugs to include for predicting additional drugs. In this example, the top 50 associated drugs are used to perform the prediction.

Predicted Drug Tables
Predicting additional drugs that should be associated with the search terms is performed using the drug-drug L1000 signature similarity matrix from SEP-L1000 and the drug-drug literature co-mentions matrix from DrugRIF. The results table can be viewed by selecting the corresponding tab. The prediction tables list the top 200 drugs most associated with the drug set from the associated drug table on the left.

The data from both tables can be downloaded in a variety of formats. The drug set within each table can be directly submitted to DrugEnrichr for further analysis.

The novelty of drugs is also reported here by returning the number of publications per drug. Drugs are grouped into four quantiles of novelty based on the publication count of drugs in DrugRIF. A drug is rare if it has 7 or fewer publications. A drug is uncommon when it has between 8 and 25 publications. Common drugs have 26 to 87 publications. All drugs with at least 88 publications are considered very common. These bins divide the drugs into equisized bins.

Please acknowledge DrugShot in your publications by citing the following reference:


The DrugShot source code is available from GitHub under the Apache License 2.0. Commercial users should contact Mount Sinai Innovation Partners at MSIPInfo@mssm.edu for licensing.

GitHub Repository
The DrugShot source code is available on GitHub at https://github.com/MaayanLab/drugshot